Section 1: Artifact Metal From the Remains of the World Trade Center is Awarded to KVFD

In late 2009, almost a decade after the tragedy of September 11, 2001, the 9/11 Families Association announced it would donate to selected fire departments and municipalities nationally, structural metal remains from the horrific 9/11 destruction of the World Trade Center in New York City, for creation of public memorials nationally to commemorate forever those 2977 firefighters, police and other citizens lost in that tragedy.

KVFD’s Board voted to apply for a major piece of this artifact metal for creation of a National memorial of remembrance to be built at KVFD. A KVF D 9/11 Memorial Committee was formed by the KVFD Board. This committee was chaired by KVFD’s then~President, Steven R. Semler. Semler applied to the 9/11 Families Association for a major piece of this artifact metal. The application initially received no response, but when Semler was able to speak directly to the President of the 9/11 Families Association located in New York City (Lee Ielpi — a retired FDNY firefighter who lost his FDNY firefighter-son in the incineration of the WTC), he explained that KVFD 1) responded to the Pentagon disaster of 9/11, and that 2) KVFD also proposed to build a 9/11 Monument right on the thoroughfare of Connecticut Avenue on a direct commuter route ten miles straight to the White House, Ielpi promised favorable action on KVFD’s application.

Thereafter, Semler and then-KVF D Lieutenant Ron Dowdy, Jr. travelled to JFK airport in New York, where these hallowed metal remains were stored in two airplane hangars, to choose three pieces of metal – one of which would be selected by the 9/11 Families Association for donation to KVFD. KVFD was awarded its first choice – a sixteen foot long, one ton piece of twisted and burned structural metal box beam from the point of airplane impact into the WTC, the distortion of which fully reflected the horrific nature of the events of 9/11. There then ensued a New York federal court order transferring title of the artifact metal to KVFD, clearing the way for transfer of the metal to KVFD.

Pickup of the metal from JFK was then arranged with the Port Authority of NY/NJ, which was the owner of the WTC, and hence, the owner of the metal remains of the WTC. KVFD Life Members Keith Golden and Ernesto Moretti then drove to New York’s JFK airport, using Keith’s truck and a borrowed flatbed trailer, to bring the historic metal back to KVF D Station 21 where it would be stored pending design of the Monument for Station 5. They did the round trip in one very long day. During the trip to JFK, they asked a NYC policeman for directions, and the policeman, learning their mission, then escorted them to the storage hangar at the airport. 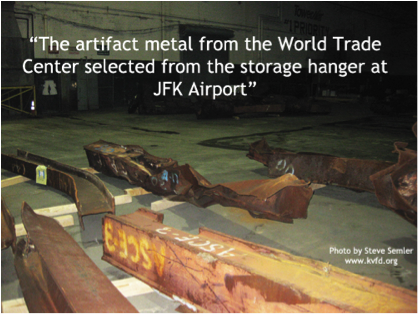 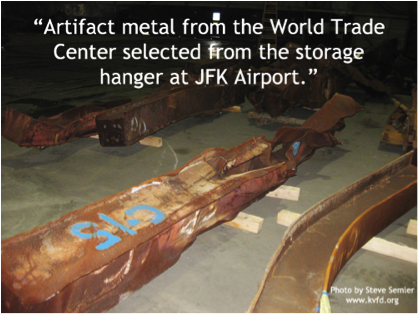 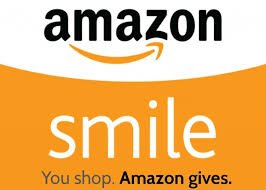 There are two options for completing an online application for Membership.

Please contact recruiter@kvfd.org if you have any questions or require more information.